For Chris Otto, the founder of Run NOW for What, running helps relieve stress, brings balance to his life and is a personal fitness commitment. What first began in 2012 as a lifestyle choice, has turned into something much bigger, a chance to give back to local non-profits in a big way.

In the fall of 2013, Otto, a married father of 3 and Hamilton, Ohio resident, heard from his wife about a seven year old boy named Cameron who had been diagnosed with a rare form of cancer at the age of three. After years of battling the disease, Cameron and his family were informed that the condition was terminal.  Cameron’s situation weighed heavy on Otto’s heart for months but he was unsure how he could make a difference. He knew the family was struggling financially. They had created a fundraising page to which he donated, but he wanted to do more to help Cameron continue to fight.

On a crisp morning in early spring 2014, while out for his usual run, something felt different for Otto, “My body felt unstoppable. As I ran, I thought about this boy. About how strong he was, about how inspirational he was and about how blessed I am. I ran 14 miles that day, my longest ever. When I got home I KNEW what I must do.”

A few months later, Cameron lost his battle to cancer. Otto was devastated and contemplated giving up, however “something inside me kept telling me to move forward, to continue to run and help others” recalls Otto.

Determined to continue to make a difference, Otto created 2 other runs, one to support a friend and another for the fallen firefighter Daryl Gordon. Chris Otto (center) with other Our Daily Bread Volunteers working in the kitchen. Photo: Jeni Jenkins

According to Otto “Run Now for What is a group of people that are inspired by running and helping others. We create “unorganized” virtual running events, via Facebook and other social media platforms, to raise funds, share inspiration and support individuals in need! We believe that anyone can make a difference and it is our mission to Run, Donate and Inspire others.”

Otto created this first  30 day Run/Fit Challenge to raise funds and spread awareness of Our Daily Bread. The 30 Day Run/Fit Challenge is a “secret” Facebook group. Entry Fee is $30.00 and 50% of proceeds will go directly to Our Daily Bread. The winner of this challenge will be the person with the greatest transformation after 30 days. This person will receive a $200.00 cash prize and recognition via social media.

In addition to supporting Our Daily Bread through this 30 Day Challenge, Otto, the General Manager of Potbelly in Mason, Ohio, and a team of Potbelly employees have committed to volunteering in the soup kitchen at Our Daily Bread. We at Our Daily Bread are grateful and inspired by Chris Otto and his team of runners and employees. Otto has found a way to do something he loves and make a difference in the lives of others, with compassion. To enter: Send $30.00 via PayPal to Chris.otto1983@gmail.com, after which YOU will be added to the group! This challenge begins Monday, July 6th. For rules and regulations please check out their website www.runnowforwhat.com “We challenge YOU to make a difference!!”

This week only, Otto is letting people into the group for the first week for free. This gives those interested an opportunity to see what it’s about before committing. If you would like to give it a test run visit: Run Now For What Contact Page. 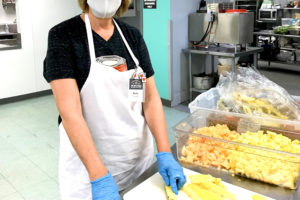 Crossing the River with Patty

Patty has been volunteering with us for many years, and[...] 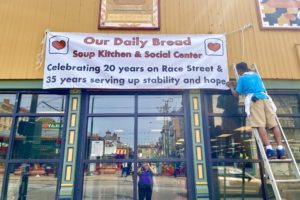 Mike hangs a celebratory banner on the Race Street side[...] 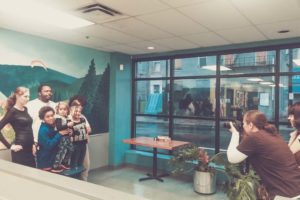 On Wednesday, November 18th, six of our Kids Club families[...]